Today’s post is mostly images, as I process what I felt and witnessed today during what is turning out to be the largest protest in U.S. history. I’m talking about the Women’s March, and all of the sister marches both here and around the world.

It was an amazing experience. Where yesterday felt bleak and hopeless, today dawned bright (even in those cities where the sky loomed with clouds). Humans of all colors and creeds and gender identifications stood, walked, chanted, hugged, fist-bumped, wept, yelled.

And it was stunningly peaceful. Angry, yes. Fiercely joyful. Determined. But today there was no looting, no destruction; it was extraordinarily respectful. I could hear intersectional dialog happening, and of the one (!) Nazi flag I saw waving, nobody engaged. That fellow simply marched silently, surrounded by pink pussy hats and slogans that put his hate to shame.

The single act of violence we witnessed was a woman beating a Trump piñata. It was ruefully funny for a split second, until we realized that it sent entirely the wrong message. It’s no better than Obama’s detractors burning him in effigy, and so we yelled that violence was not the answer. But that was all.

Today pussy grabbed back. Tomorrow she shows her claws.

We can all feel good about the truly massive statement we made today, but what’s next? Because meanwhile, Trump admits that he lied about writing his own (rather horrifyingly fascist) inaugural speech; Steve Bannon wrote it. He then spent his first day gaslighting the CIA while his new Press Secretary, Sean Spicer, spent the day gaslighting the press. Not an auspicious beginning.

Tomorrow we get to work. We make the important phone calls, write the letters, engage our elected officials, hold them accountable. They represent us, and that means all of us.We cannot and must not become complacent, resting on the not-inconsiderable laurels of today.

I am already planning to add a block of time every day to phone the offices of my representatives, to continue learning about nonviolent protest and communication, and to begin learning what it takes to get involved in government myself, beginning at the local level. Today I met Nancy Pearlman, who is a member of the LA Community College District Board of Trustees, and who works for both the environment and for education. I plan to pick her brains on her experiences. And we’ll see what happens from there.

What will you do? 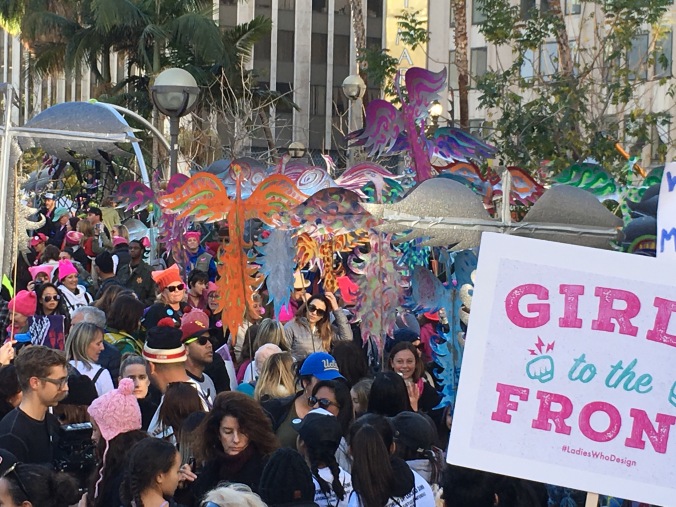 Images and video by Rebekkah Hilgraves and DeeDee Richmond.

This site uses Akismet to reduce spam. Learn how your comment data is processed.

And what can we do as musicians, as artists? Just this: Use our music, our voices, to protest injustice, to raise up the voices of those who aren't heard; to weep with our instruments or our words; to change the world with our art.

Other sites of mine